What Causes Flight Delays? Top Reasons Why Flights Are Delayed 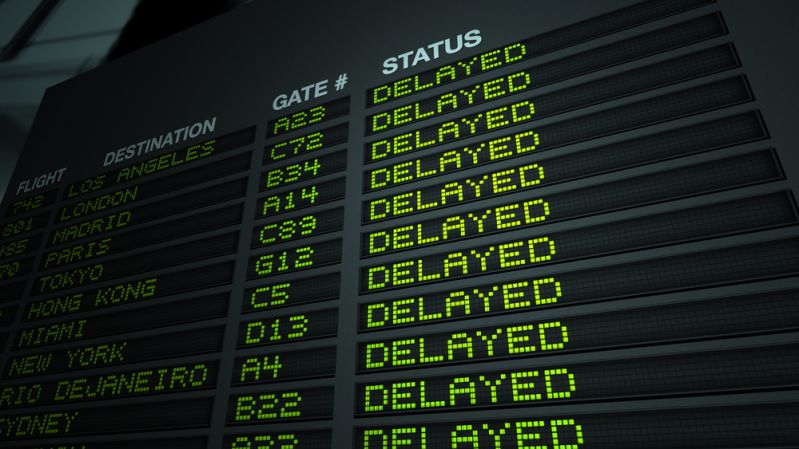 Flight delays are a typical part of our day to day, all over the world. But, people often feel confused and frustrated by what happens here. Are they going to be able to get where they need to go? Why is my flight delayed in the first place? How often are flights delayed, anyway?

There are a lot of very common reasons why a flight may end up being delayed for one reason or another. Here’s a look at some of the most common reasons that you will find that a flight would be delayed.

Most of us know that bad weather can be a really big problem when it comes to trying to get a plane to and from a safe location. There are a lot of details that need to be sorted out before determining if it’s going to be safe for a plane to fly.

If there is any sort of snow, sleet, or rain, there is a high chance that you won’t be able to fly safely. The plane’s altitude is so high that the snow or rain could end up becoming hail or ice, which makes it more likely that the plane sustains damage while it is in flight.

On top of that, wind is a very dangerous issue that needs to be dealt with, as well. Any sort of wind or turbulence can be a really big problem in regards to flying a plane safely. So, if the wind levels aren’t at the level that they should be, it’s incredibly important for airlines to shut down their flights and delay until the weather is better for flight purposes.

Related to weather, one big reason for flight delays is the ability to see. If cloud cover is too thick, or there is a lot of fog, it can be dangerous for planes to take off, fly, and/or land as they need to. That’s why, during the winter months, you’re often going to see many more delays due to visibility issues. A simple snow squall could end up taking a plane down because of the inability to see.

When you think about the different flight delay reasons that are out there, it’s likely that you remember “mechanical trouble” as a part of that process. Whether it’s a landing wheel or the air conditioning, mechanical issues need to be sorted out before a plane is safe to take anywhere.

Planes are very delicate mechanically; one thing not working correctly can cause issues in other places where you may not have expected issues. This makes it hard to really pinpoint what is going on and it may take longer than expected to properly take care of those problems.

There may be even more delays related to mechanical issues that have nothing to do with the plane itself, too. Not only does the repair need to be made, but the plane needs to be re-inspected and paperwork needs to be filed before the plane can be loaded and take off. So, that’s more time that you need to be delayed.

Mechanical failure of an aircraft is not considered a force majeure (unforeseeable circumstances that prevent someone from fulfilling a contract). Using AirAdvisor, a party affected by mechanical failure can get between 250 and 600 Euros in compensation.

Planes have all sorts of things that bounce off of the windshield while in flight. But, there are times where the windshield is starting to see some problems that may be of concern, and that’s where delays can happen.

Large birds are typically the worst culprit for this, so it’s important for pilots to keep an eye on what’s going on and whether or not they need to do a cursory look at the windshield when they get to their destination. If they find that there’s a potential issue, it’s going to cause delays for people on the ground.

Many passenger planes take extra cargo with them when they’re in the sky. Whether it’s helping to transport packages or pets, planes try to balance things out and use space effectively. That’s why cargo can be one of the causes of flight delays that you may come across as you travel. If cargo is delayed, the plane will be delayed.

Sometimes, the cargo may be rerouted through another plane that has extra space, but this is restricted because of weight and balance (which we will be discussing a little later in this article).

Other Flights Are Delayed 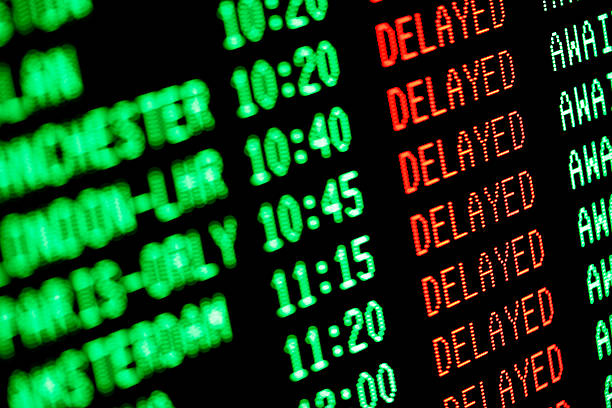 It’s likely not surprising to hear that one of the big causes of flight delays is, well, other flight delays. Aviation pros call this a “knock on” effect. If one plane is delayed, it’s quite likely that other planes are going to experience a delay as well.

Here’s how this may happen. You’re going on a trip from Los Angeles to New York City. You have two connections – one in Chicago, and the other in Baltimore. Your Los Angeles flight gets delayed due to fog. Your plane is filled with people who have a layover at O’Hare with you. Suddenly, that flight from O’Hare to BWI is delayed too.

The flight from O’Hare to BWI is supposed be a connection for 3 other flights, including an international flight. Now, those flights are delayed. It’s a huge domino effect, and it can make airline schedules incredibly complex and frustrating.

Planes are rated to hold a certain amount of weight and, if they are to go above that weight, it could cause problems while they’re in the sky. So, if a plane is overbooked or there are other weight issues that need to be sorted out, it’s incredibly important for the plane staff to deal with that quickly before taking off.

This is why there are weight restrictions in regards to the luggage and carry-ons that you can bring with you on a plane. Those weight restrictions make it easier to balance the plane, and it prevents issues like delays or forcing people to take another flight for safety precautions.

While these aren’t as common as other reasons you may find, there are times where flight employees may go on strikes, causing delays and cancellations of flights until things are resolved. More often than not, these are limited to one airline, or even to the crew on one flight (called a “wildcat strike”).

In those cases, the airline will do their best to connect individuals with another airline, typically a partner that typically goes out of the same hubs as their airline. This makes it a lot easier for things to get rescheduled, but it can also be an issue for the airlines who now have to try and fit you in.

Industrial strikes, on the other hand, are strikes from air travel adjacent professionals. For example, if Air Traffic Control or staff at a specific airport has gone on strike, it may also cause a delay. In those instances, your rights are the same.

The problem is, in many instances, airlines will refer to these as “extraordinary circumstances.” It can be difficult to get any compensation directly from the airline as a result. As with many of the other delay and cancellation issues mentioned in this blog, AirAdvisor can help you to get the compensation you deserve for these situations.

If there is the potential for bodily harm, or there is a national or international security issue, air traffic control and the flight authority in the country you’re in can cancel or delay flights. This is what the Transportation Security Administration did on September 11th, 2001, when the United States experienced a terrorist attack using planes.

If you are in a situation where you need to deal with compensation related to a flight delay or cancellation, AirAdvisor is here to assist you with the process. We can answer any questions that you may have and help you to determine a way forward. We can also make sure that you get what you deserve when all is said and done.

I was denied compensation by American Airlines because they had a cabin crew strike I understand that this is illegal. you can help?sorry for my english, i'm from argentina

Why does it say at the bottom of the article that I can get $ 700? I thought the maximum is 600 euros

If it’s not your article, I don’t know further and didn’t use my rights

please give advice. Lufthansa recently told me that her flight was delayed due to covid and they had nothing to do with it, so they would not pay compensation. How can this be? can you help me*

And if the flight was delayed by 2 hours 58 minutes, but because of this I missed the next flight, can I get compensation?

How to get a refund for canceled flights?

Can You Get Compensation for Cancelled Flights?